At the beginning of the school year, Ms. Herman sat down with the 5th-grade students to talk about a new extension to science class, Outdoor Education.  The conversation gravitated towards different ways we can help the environment, and how humans have affected the planet and ecosystems by using products such as single-use plastic and oil.  What started as a casual discussion turned into the students 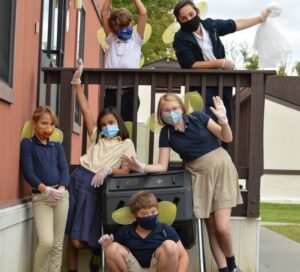 wanting to be proactive now.

The class created a club and called it Ms. Herman’s Hive, which focuses on environmental initiatives.  “We have six students in our class, which makes us close and it helps create an environment where expressing thoughts and ideas is easy for them," says Ms. Herman.  "The students mentioned composting as something they were all interested in, and after researching different composters they decided they liked one that spins and tumbles because the little kids would enjoy using it, too."

“The Outdoor Education Class is completely student-driven.  They steer the class in the direction they want it to go, and because they've taken ownership, they're really enthusiastic about it.”

“You want to fill up one side with grass, leaves, and vegetables.  The only things you cannot put it in are meat, dairy, fat, and citrus fruits,” explains Lucy Esposito '28, “because ants like citrus fruits!  And earthworms don’t like citrus fruits and earthworms are really good for the compost.”  After just a few weeks, the students already have a solid understanding of the composting process,  “Once we have it filled up, we have to spin it,”  says Brendan Griffin '28  “and then it needs time to turn into soil.” 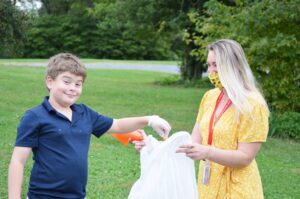 The students are optimistic about the future of the planet.  They understand if they put in the hard work, effort, fundraise for causes, and write their elected leaders, changes can occur.  We are finding our younger students are inspired to work in occupations connected to nature.  For instance, 5th-grade student Riley Garrido '28, the current President of Ms. Herman’s Hive, is on track to become a marine biologist.

Ms. Herman graduated from JMU with a Biology major.  She worked as a special education teacher in Berryville before joining the WCDS Faculty.  Recalling her experience Ms. Herman reflects, “It was eye-opening, and it made me rethink my approach to teaching.  I want to give my students the skills and the freedom to make this their pathway and create their own story.” 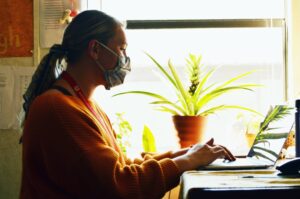 When asked what her favorite part about teaching at WCDS is, she exclaims, “The students! They are so enthusiastic and as long as they are learning something, they are happy."

We are excited to welcome Ms. Herman to WCDS and are looking forward to all the fun projects the future holds for these students, including pollinator gardens, raised beds with soil from the composter, and much, much more. 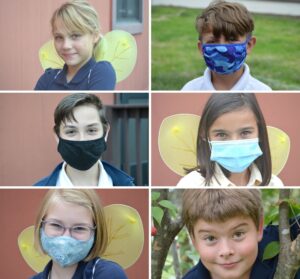