In 1972, Dr. William E. Lynn, Jr., along with his wife, Pamela Lynn, founded the institution that is now Wakefield Country Day School with little more than vision and hope: a vision for a better method of preparatory education and the hope that parents would see the value of what they proposed. In the course of their careers as teachers, they had developed a dream for a new type of school - a place like nowhere else - where the depth and logic of a classical education would be brought to children in the warm and engaging setting of a modern classroom, where knowledge, discernment, and creativity would be held equally as skills to be taught. At their school, traditions and history would create a vibrant and zestful community where the young thinkers and learners would be inspired to gain knowledge about the world and themselves, and then be challenged to make both the better for it. Furthermore, the Lynns wanted the opportunities they envisaged to be available to as many as possible; their school was not designed as an enclave for the elite but rather as an oasis for all who wanted to whet their thirst for knowledge. No small dream was theirs when they laid the first foundations for the school in 1972.
Over 45 years later, it is clear their efforts were not in vain. The Lynns’ call was answered by families not only in Rappahannock County but in all the surrounding counties as well, creating a geographically and intellectually diverse student body within the welcoming walls of WCDS. Within three years, the school had outgrown the original building (the three-bayed wood construction), and it almost doubled in size with the addition of an auditorium and the lower hall suite of classrooms. Over the next decade, the school continued to expand, adding on the current science labs as well as the gymnasium and library.
In 1988, Dr. Lynn died unexpectedly, shaking the school to its core and leaving behind a community that mourned the loss of a man who had been so integral to shaping the school’s vision. The following years saw a fracturing in the Wakefield community as members struggled to determine a path forward for the school; however, Pamela was still confident in the original vision that she and her husband had nurtured on the campus for so long. In 1991, she helped the institution weather a difficult schism and led the school into its next chapter; our crest and the current corporation were formulated at this time. 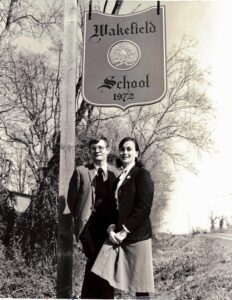 Since then, the school has remained a Rappahannock community fixture, educating youths from the immediate area as well as from seven surrounding counties and numerous countries around the world. It has sent students to some of the finest universities in the world and produced many a class of intellectually curious and well-rounded graduates. Wakefield Country Day School has preserved many of the traditions and institutions instituted by William and Pamela when they first founded the school, from the Word of the Day books that have improved graduates’ vocabulary for over 45 years to the Medieval Banquet that has delighted students for as long. And, most importantly, it has kept true to its founding principles: virtus et sapientia, virtue and wisdom.