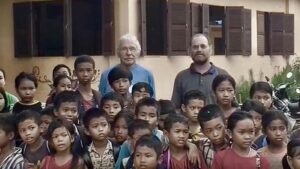 Paul Larner, Chairman of the Board of Directors of WCDS, traveled recently to Lotus House, a community-based school in rural Cambodia. It was built 10-years ago by Carol Morale, a woman from Australia, and Sophia Yan, a monk from the local village.

Larner became involved with Lotus House four years ago when he traveled to visit Angkor Wat, the world’s largest religious monument — and from the 6th-12th century the world’s largest city. In all of Larner’s travels, he has never met a friendlier people, especially the children. Which prompted him three-years ago to make a contribution to build a two-bedroom guesthouse for visiting volunteers. This year he was part of a group …..Read More at Rappnews.com