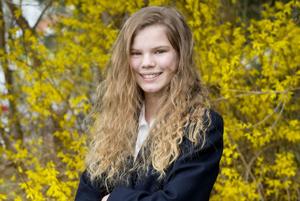 Shiloh Phelps, of Maurertown, started singing when she was 3 or 4 years old.

One of her first performances was singing Cyndi Lauper’s “Girls Just Want To Have Fun” at Kings Dominion.

Now, the 12-year-old is preparing to sing at Carnegie Hall in New York City as part of the Middle School Honors Performance Series from June 25 to 29.

“I feel proud of myself,” she said. “The choir was taking thousands of people from all over the world.”

Shiloh, who attends Wakefield Country Day School in Huntly, said her music teacher Andrea Diggs nominated her to audition for the choir.

“I knew it would be a great opportunity for me to be in Carnegie Hall,” said Shiloh.

Having been to New York City on a day trip, she’s excited to spend several days there in June. Her week-long trip will include several rehearsals but also leave time to see the sights and take in a Broadway show.

The choir will sing in the Honors Junior Performance.

Shiloh, who sings soprano in her school’s six-member choir, (Read the rest of the article at Northern Virginia Daily)