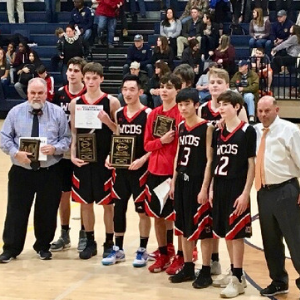 The Owls were the #1 seed and faced the Warriors of Quantico Middle/High School, the #2 seed, in the DAC Division II championship game on 2/23/19.  WCDS suffered from poor shooting from the field and lost starter Hank Lin to an injury early in the first quarter. The Owls were down 12-5 at the end of the quarter. John Mullins scored all eight of the Owls’ points in the second quarter, but the Warriors again scored 12 points to lead 24-13 in the low scoring half.   The second half was evenly played with the Warriors scoring 26 points in the half, and WCDS scored 25 points. John Mullins scored 19 second-half points, and the Owls shot their highest percentage from the foul line on the season, going 16-18 for 88.8 %, but it was not enough to overcome poor shooting from the floor and losing a starter early in the game. The Warriors won the tournament title, 50-38.

It was still a historic season as the Owls won their first outright regular season championship in DAC Division II boys basketball, and freshman John Mullins was voted Tri-Player of the Year. Mullins was joined on the First Team ALL-DAC Division II by teammates Ben Kelsey and Martin O’Heir. Coach Costello was named DAC DII Coach of the Year for the third time in his career, twice at WCDS.  John Mullins scored a game high 27 points in the championship game, adding five steals and six rebounds. Ben Kelsey pulled down 13 rebounds and added four points. Hank Lin hit two foul shots and grabbed a rebound before his injury. Kevin He had four points. Martin O’Heir had six rebounds, two steals and a point. Ezra Aaronson grabbed three rebounds. Alex Diehl had one rebound and one assist.

Congratulations to Coach Dick, Coach Costello and team for a winning championship season. Our final record was 9-6.