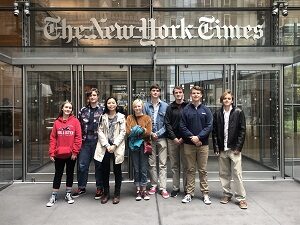 Making their annual pilgrimage to New York City this past week, the Wakefield Country Day School Journalism Class witnessed a rare, behind-the-scenes glimpse of daily news in the making.   At the top of the agenda was their annual invitation to sit in on the Page One Meeting at the New York Times.  At this meeting the editors of each section of the paper hash out the most newsworthy stories to appear on the front page of the NYT the following day.  With the Times DC office teleconferenced in, our class witnessed a news embargo as Gordon Sondland, the Ambassador to the EU, altered his testimony in the impeachment proceedings.  After checking their sources and their facts, the NYT finally broke the story several hours later. The WCDS journalists had been privy to groundbreaking news before the rest of the world!

In the journalism class, students learn about ethics in reporting, the latest software being used in the industry, techniques for taking excellent photographs, and learning how to enhance them using Photoshop.  Several past journalism students have gone on to work at college newspapers and television stations and have found jobs after graduation in writing, broadcast journalism and marketing.