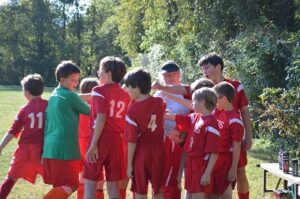 WCDS Middle School Boys Soccer wins semi-final game 6-0 in an upset victory against #2 seed RMA. Sean Regan, 7th grade, Front Royal, started the rally when he dribbled up the sideline, cut in and bent it in on the far post, leaving the score at half-time 1-0 Owls.  At the start of start of the second half, Daniel Fletcher, 6th grade, Flint Hill, shot from the left and watched as the ball went through the goalie’s arms.  Will Wofford, 5th grade, Sperryville, scored the third goal, dribbling through two players, and then shooting to the right-hand upper corner for the score.  Regan took the next goal, after having received a cross from Wofford, and dribbled past a player and shot into the bottom right.  Caden O’Bryant, 5th grade, Culpeper, scored the fifth goal of the game, after receiving a cross from Regan, and volleyed a shot that went under keeper for goal 5.  The boys play in the tournament final game Friday, Oct 11, against Chelsea.